Full Disclosure – I have no idea what a good man looks like.

So if you’re visiting my site for the twelve steps to finding the man of your dreams, you are in the wrong place. I know as much as you do, possibly even less. All I can offer you are my experiences and honesty, and we can learn to traverse dating in 2018 together. I don’t know where, when, and how to find a good man. I can’t tell you what signs to look for to determine if your investment has any future. I can’t advise you what determines a red flag and if such is forgivable. (Unless he doesn’t like 90s R&B. Then you need to let him go. He ain’t kinfolk.) In other words, I am not your relationship whisperer. What authority do I have to define how success and happiness should look for you?

Furthermore, what authority does anyone have? Meme after meme, article after article, advice from friend after friend. Everyone has suggestions and recommendations for your situation, and most will contradict each other. “Be your man’s peace.” “You gotta let that man know you’re not to be fucked with.” “A real man will never let you go to bed angry.” “A successful man is a busy man. Learn to control your attitude.” When your peers and social media fail you, you decide to resort to wisdom. You talk to your mom and grandmother and aunties. One will undoubtedly tell you to just let a man will be a man; whereas, one of your aunts will tell you all men ain’t shit. And it all ends with you being in a worst place mentally than you were before you sought outside counsel.

Last week, I was out eating with a friend, and before we headed home that night, we’d been approached by three men. Now, this wouldn’t be noteworthy if all three were not married and on their second or third marriage. (Probably because they’re still trying to act single but I digress. Topic for another day.) Now the two who tried to shoot their shots with me did so by trying to disparage my relationship. “How long have y’all been together?” “What does he do?” “Where is he right now?” “You sure?” I found this both laughable and dismissible for I knew it came from their objectives and had absolutely nothing to do with my relationship or my man. If they could cast doubt in my mind, maybe they’d get to take me home. Instead of entertaining that bullshit, I asked if their wives knew they were breaking curfew to entertain two women? I may not know what a good man looks like, but I know a no good one. Suddenly, they found me no longer that interesting.

If I were still in that weakness where I looked for confirmation of my relationship from outside parties, maybe one of them, the attractive one, could have accomplished his goal. Thankfully, I was delivered from that sunken place. There’s a quote by Iceberg Slim where he says “There is no reason except a stupid one for anybody to project on that screen anything that will worry him or dull that vital edge. After all, we are the absolute bosses of that whole theatre and show in our minds. We even write the script. So always write positive, dynamic scripts and show only the best movies for you on that screen.” What he’s saying is that our minds are our own to control so why think thoughts that will make us unhappy? It is said over and over, but it remains the truth. You have to think positively. Imagine only the best for yourself, and it will manifest.

I am a devoted overthinker. Even at my happiest, my mind will find a way to ruin those moments for me. I start worrying about being judged, deceived, belittled. The negativity plants seeds in my psyche making its soil fertile to harvest the doubts and aspersions of those who do not mean me well. When this happens, most of us over-correct. We feign an overabundance of happiness to prove our enemies wrong even if that enemy is ourselves. Maybe those doubts are your instincts warning you and should be heeded, but you’ll be damned if your petty friend is proven right. So you stay where you shouldn’t and don’t listen when you should.

My relationship went through a tough period a couple of months ago, and it was exacerbated because it occurred while I was dealing with medical issues. We eventually reconciled, but it wasn’t immediate and it wasn’t easy. And for any of those who believe I only play a demon on the internet, I can be absolutely satanic in reality. So difficult does not begin to describe what I was to deal with. There came this point when I had to decide if we were going to call it quits or move forward. And it was a struggle for me. My heart and mind were at war. Then he observed, “You’re fighting yourself.” He was absolutely right. I wanted to be with him and was more than willing to forgive him, but I was afraid of what my friends would think. I was afraid that we’d fuck up again. I feared being made a fool of in front of others. Here was a man trying to provide the happiness I want, and instead I was focusing on those who took any opportunity to deflate my balloons of joy. I’m after nothing short of a last name change, yet I’m worried about those who can’t make it beyond Facebook official. If that. Tuh.

Thus, I made the decision to put my faith in him, in us. Moreover, I put my faith in me. I trust myself to know who and what is good for me. My energy and mind are mine to rule. My life is a dictatorship. So when you find yourself overthinking, make sure you are only hearing your thoughts. This isn’t always easy because I’m a huge reader and listener. I love receiving information so I had to learn to control the flow of it. I do this by saving what’s beneficial for me and deleting what isn’t. And I also control what of my business I tell others. I’ve said it in an earlier post, people can’t know what’s going on behind your doors unless you open them.

It is true I cannot tell you what a good man looks like. I could show you mine, but I know some of you found my site because you’re hoes and I don’t want y’all to attempt to try me. What I can say is that we talk a lot about what the love of a good woman will do for a man, and we don’t say nearly enough how the support of a good man will affect a woman’s emotional being. My man’s most repeated statement to me is “Focus on me.” I dismissed it every time he’d say it in the beginning, and now, that statement is my anchor. When circumstances and work and life aren’t fully under my control and start overwhelming me, he’s given me a focal point. I can’t fully describe how comforting and uplifting it feels to know this man isn’t going anywhere. I don’t know if that makes him a good man, but it makes him good for me.

Good men aren’t lacking; our faith is. We’ve made bad choices in the past. We don’t know what a good man looks like, not because we’ve never seen one, but because we haven’t waited for one. We’ve settled for X, Y, and Z instead of waiting for the man who will give us the entire alphabet. We decide men can’t be trusted so we turn “savage” and hoe it up. When you do meet one who can offer A-Z, he doesn’t want you because you’ve already fucked his frat brothers. Sometimes, we try to build a good man out of a bad one. If you’re not satisfied with the man he is, don’t fall in love with the man he could be. That’s fantasy and futile, and now you’re bitter and shitting on someone else’s chances at happiness.

You know what’s good for you. Neither I nor anyone else are an authority of knowing what type of man, what situation, what baggage, etc, is worth your time. You do, though. No one lives your life 24 hours a day but you. So why do we allow our minds and others to talk us out of what we want? Put your trust and faith where it belongs – in YOU. Face your insecurities. Cut off bad energy. Tell your friends less and show social media nothing. Author your own script for the movie that plays in your mind.

You don’t need to be told what a good man looks like. Know thyself. Till the soil in your mind until it’s fertile for the right love, and your soul will recognize its counterpart. That, I can promise. 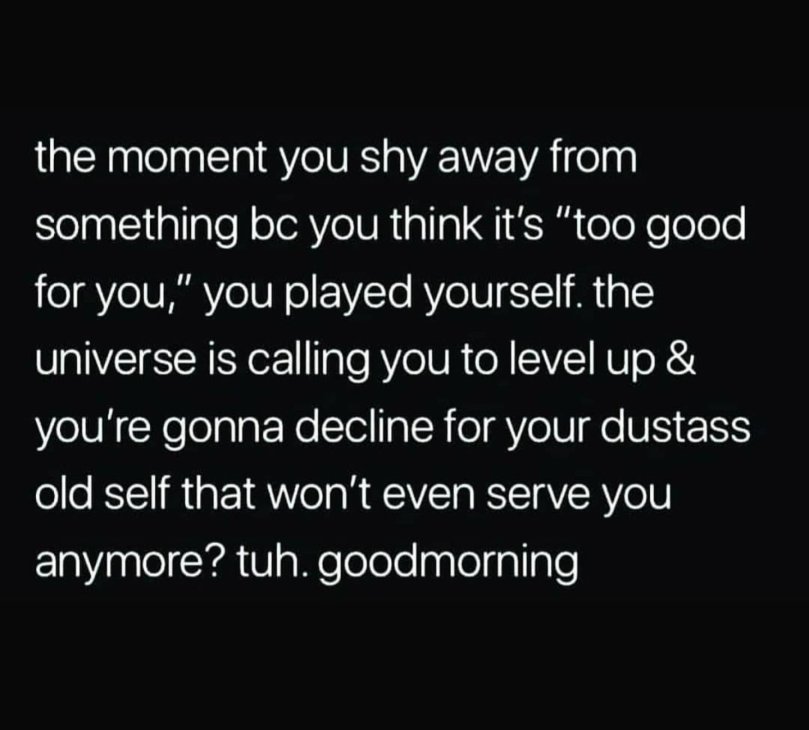 💁🏾‍♀️ Dafuq?
😢😢😢 RIP to these two beautiful souls and the others who lost their lives today.

My Flavors in Bite-Size